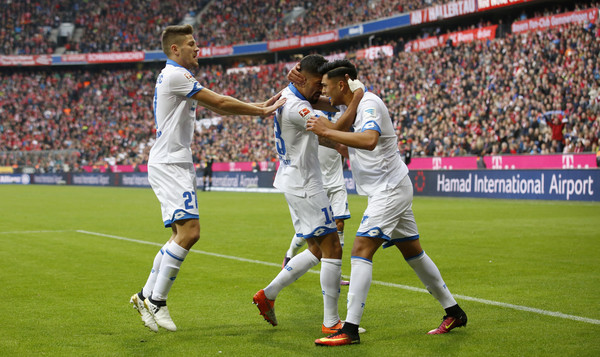 Hoffenheim’s latest victory, a 1-0 defeat of Bayern Munich in which Andrej Kamaric scored his 11th goal of the season, tied for the team lead, vaults them into 21st in the Power Rankings. More importantly, they have solidified a 10 point gap between themselves and fifth place Cologne, all but guaranteeing a Champions League spot with just seven games to go. Hoffenheim has only suffered three losses so far this season, all away from home, including one to titans Red Bull Leipzig. They got the win over Bayern Munich despite being out possessed 64-36 and out shot 21-14. A trip to Hamburg is up next this Saturday.

Facing Juventus twice in one week is no small task, but Napoli was able to get a draw in the league fixture on Saturday and score a win in the cup tie, despite losing on aggregate. They equalized the scoreline with a Marek Hamsik strike in the 60th minute. Napoli deserved to win as they out possessed the Old Lady 61-39 and won the shot battle 17-4. The cup tie was all but lost after Napoli dropped the first leg 1-3, and even a 3-2 comeback on Wednesday was not enough.  They still must avoid a late surge from Lazio in order to sure up a Champions League spot and can help themselves out in that category with an away win at Lazio on Sunday.

Chelsea may have lost 2-1 against Crystal Palace on Saturday, but they won when it counted, scoring a 2-1 victory over Manchester City on Wednesday. They lost the possession battle 60-40 and were out shot 17-10, but Eden Hazard scored an early goal and a rebound off a penalty to take the win. Hazard’s brace gave him his team leading 13th goal on the season, and Chelsea kept the pressure on second place Tottenham. The Blues travel to Bournemouth on Saturday before another top six battle at Manchester United on April 16.