A little over a week ago, Atlético were on top of the world after defeating Athletic and Sevilla to improve to second in the league, just four points behind Barcelona. Now, after a crushing 1-2 defeat to reigning English champion Chelsea, the red and whites find themselves with just one point from six in the Champions League. Their upcoming matches home and away against Qarabag will be must wins, and a win at home against Roma could also be necessary.

The Colchoneros found themselves without a left back at Leganés and played to a 0-0 draw in a game in which the attack lacked luster. The draw sent them six points adrift of Barcelona, who have taken all 21 points this season. Atleti must get at least a point (and would prefer three) at home against Barcelona on October 14th when they return from the international break. Since there are no Atlético games for two weeks, I’ll be discussing tactics and managerial decisions in a two part series. This is part one asking: What went wrong vs. Chelsea and at Leganés? Part two will ask: What went right and how can the team improve? What is the best approach ahead of the most important game on the young season?

It is a bit of a cop-out to say that Atleti were just tired, but they have had one of the hardest starts to the season. They not only played seven fixtures in 21 days, but also played their first four matches away from home. What’s more, they faced top clubs Valencia, Roma, Athletic, Sevilla, and Chelsea. Koke, Jan Oblak, and Saúl have played all 810 minutes this season meaning the midfield could certainly use some rest. However, all three of those players will feature in their national teams this week meaning they could still be gassed when the Barcelona match comes around.

Aside from those two clear starters in midfield, Diego Simeone has one of his deeper teams at his disposal. Therefore, no other player has played more than 590 minutes this season which means they should all be relatively fresh. However, both Filipe Luis and Lucas suffered hamstring injuries against Chelsea which is cause for concern. Simeone faced the issue of trying to rest some tired players against Leganés while also needing the win. He strangely subbed Sime Vrsjalko for Antoine Griezmann in the 67th minute, choosing to go for the draw. However, in this instance, he probably should have removed Saúl or Koke to give his most fatigued players some rest. Obviously, Saúl, Koke and the other starters will play against Barcelona. The fixtures get easier with trips to Qarabaq and Celta Vigo next, giving Cholo a chance to rest his two hardest working players.

Simeone employed his traditional 4-4-2 formation against Chelsea, choosing to stick with what worked well against Athletic Bilbao and Sevilla despite facing Conte’s 3-5-1-1 formation. He did make a few notable changes to the team that defeated Sevilla, however. With so much fixture congestion it is hard for the team to practice multiple formations. This is especially true with Simeone because he almost always uses the 4-4-2. This being the case, it is unlikely that Atletico could have gone with anything different against Chelsea’s three at the back even if they wanted to. The 4-4-2 also has its merits in Champions League because it is defense-minded and doesn’t usually allow many goals. The problem on Wednesday was the poor form of players more than the formation.

After the loss to Chelsea and the loss of Lucas and Filipe to hamstring injuries, Simeone had no true left backs and opted for a 3-5-2 formation at Leganés. While it may have been the right decision given the personnel available, Atleti had not practiced this formation much and it showed. Several players did not know their positions and perhaps were not suited for them. Saúl and Ángel Correa were thrust into a defensive wingback roles much different from their central defensive midfield and forward positions, respectively. Vietto was an unlikely forward and wasn’t up to the task in poor form. The midfield and wingers looked good, however. This formation could certainly be a good option for the future when Atleti wants to change it up and attack.

Starting at the back, Lucas retained his position over Stefan Savic and Jose Giménez. The Uruguayan national is the fan favorite of the three center backs, but Lucas deserved the position after shutting out Sevilla and performing well in the Champions League when Diego Godín was hurt in 2014-15. Juanfran earned a starting spot vs. Chelsea over Sime Vrsjalko and certainly deserved it with his veteran Champions League experience and success as well with his expertise in defending wingers such as Cristiano Ronaldo. However, he had a poor day and may deserve to be dropped from the starting 11 for a while. Vrsjalko is in form and a younger player so it may be his time to succeed the veteran.

The main problem was that Chelsea only playing three defenders gave them seven creative players. Atleti’s defenders were no match for Eden Hazard who ran all over them. Álvaro Morata also had a bit of a field day from the forward spot and of course Michy Batsuayi scored the winning goal. Almost all of Chelsea’s forwards and midfielders outclassed Atleti’s defenders which is a cause for concern. The defense is supposed to be the team’s best unit and only Diego Godín had a great game. Juanfran was in poor form while Lucas and Filipe tired themselves out.

Again, without Filipe and Lucas Simeone had few choices in defense on Saturday. He could have brought Juanfran or Vrsjalko in out of position at left back in a 4-4-2. This would allow one of them to play out of position instead of Saúl. However, his choice is understandable given that this team’s attack could almost always use a boost. The defenders played well, keeping a clean sheet and cannot be blamed for the 0-0 draw.

The midfield was a new look with only Yannick Carrasco retaining his position on the right. The club’s fastest and most creative player should certainly be playing every match he can and it is rather surprising that he has only made four starts (with three substitutions) this season. For the team to attack, he must start every match. Koke and Saúl switched positions with Koke moving to the center and Saúl on the right wing. This is also a mistake because while Saúl is comfortable playing out wide, it is not his normal position. Koke is the opposite and belongs on the right wing. Finally, Thomas Partey replaced Gabi in midfield. This is a hard decision because Thomas is a creative youngster while Gabi is a defensive field general and a huge force in the clubhouse. With Carrasco and Koke on the field, however, Gabi may be the better decision because he can help out the defense while the wingers go up to attack.

Ultimately, the midfield also had a below average match. Koke and Thomas were in poor form in the center, with Saúl and Carassco playing better on the wings. Koke playing out of position and Thomas’s attacking mind led to several chances for Chelsea. Gabi or Saúl could certainly have helped in the midfield defensively. With Koke in such poor form and fatigued all over the pitch, I can understand why Cholo chose Saúl for the right attacking midfield role.

The midfield chosen for Saturday featured Saúl and Correa as wingbacks for the first time. Despite playing out of position these players looked born for these roles, both turning out great defensive performances. However, they could have done more in attack. With wingbacks, this formation asks the central players to go forward a bit more and Koke looked a bit fatigued in this role. Partey played a solid match as did Gabi, but they did not get enough balls up front for goals. 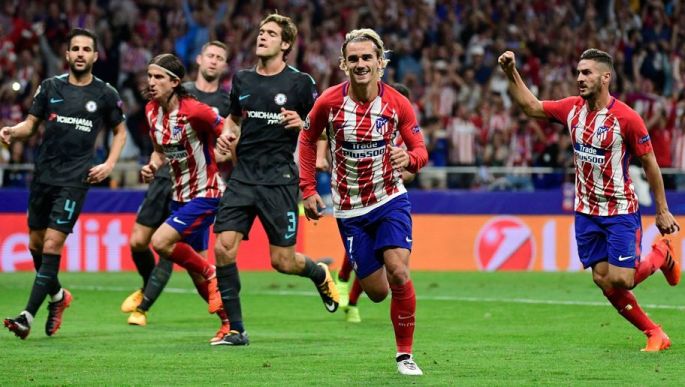 The forwards for the Chelsea match were obvious choices as Antoine Griezmann and Correa have been miles ahead of Luciano Vietto and Fernando Torres so far this season. They both turned in solid performances, but only scored one goal from a penalty. 12 shots with only four on goal is not enough for one of Europe’s top clubs. The midfield and forwards must work harder to put pressure on top defenses.

Vietto came into the starting lineup at Leganés and once again played poorly. Simeone chose to leave Carassco on the bench until the 54th minute in favor of having three forward minded players. However, a 3-4-3 formation with Griezmann in the middle just makes more sense. Kevin Gameiro should be close fit to play a full match after the international break. His fitness is the only reputable reason for his lack of play with Vietto and Torres not scoring any goals this season in their limited time. Correa and Griezmann have only accounted for five. Vietto’s form at Leganés was awful and even Griezmann looked a bit fatigued from the midweek. The forward situation definitely needs some work as Atlético ranks seventh in La Liga with only 12 goals scored this season. Just under one goal per match does not sound that bad until you realize that Atleti scored five at Las Palmas. Take that match away and it’s 7 goals in six La Liga matches. The team already has three 0-0 affairs in all competitions.

Simeone chose to sub attack for attack in the 69th and 71st minutes, bringing on Fernando Torres and Nicolas Gaitan for Carassco and Correa. Instead of taking off some of the more creative players, Cholo could have chosen to take off one of Koke, Thomas, or Saul and gone with three strikers. Without enough attacking minded players, it was hard for the red and whites to go toe-to-toe with the blues. Jose Gimenez for Thomas Partey was a defensive substitution as Cholo seemed to be going for the draw in the last 13 minutes and stoppage time. In a dangerous group where wins are at a premium, Atletico should be going all out.

Simeone made similar attack for attack substitutions against Leganés, bringing on Carassco and Torres for Correa and Vietto. As stated earlier Carassco, Griezmann and Correa is the best three forward combination. Cholo’s last substitution was Vrsjalko for Griezmann, favoring a 4-4-2 and playing for a draw. Again, Atleti must go for wins to keep pace with Barcelona and Real Madrid. A 0-0 draw against their community rivals could come back to haunt them later in the season.

That’s it for part one, but it’s not all bad as Atleti can salvage some points in the upcoming weeks vs. Barcelona and in a home and away against Qarabag. As Simeone stated, the team has the positive of staying undefeated in the league to this point. Only Barca, Valencia and Atleti can boast that statistic. Stay tuned in the coming days for part two!

One thought on “Talking Tactics Part 1: What went wrong?”