Thomas Partey netted a 59th minute equalizer, but Atletico could not overcome Michel’s 40th minute goal and drew 1-1. This marked the team’s third straight draw and sixth out of their last seven matches in all competitions.

The result slots the red and whites third in Champions League Group C. They now need to win out and receive help in order to advance to the knockout stage. Luckily, the next Champions League match, home against Roma, is not until November 22nd when Atletico will hopefully be in better form. The Colchoneros’ defensive style will also benefit from the cold weather as winter approaches.

Atletico now must turn their focus to La Liga where they sit fourth in the table, eight points behind Barcelona. A trip to A Coruña lies ahead with rain and rivalry in the forecast.

Kickoff is set for 16:15 local time in the Estadio Riazor.

As stated before, Atletico has drawn six of their last seven matches including games against competition as high as 9-1-0 Barcelona and as low as third division Elche. Their lone win in this stretch also came in Galicia, however, a 1-0 victory over Celta Vigo.

Despite a 3-1 win last time out at Las Palmas, Deportivo are also in poor form having gone 3-2-1 in their last six. The blue and whites sit 16th in the table at 3-2-5 or 11 points, five points above the relegation zone.

Atlético leads the storied rivalry 16-6 with six draws. Atletico took the first match last season, 1-0 at the Calderón with Kevin Gameiro assisting on Antoine Griezmann’s 70th minute goal. The teams drew 1-1 at the Riazor as Florin Andone scored first before Yannick Carrasco and Griezmann combined for the equalizer.

The fierce rivalry has resulted in several clashes in the past including the death of a Coruña ultra before the November 2014 match. Away fans were barred from both stadiums for the following season but allowed back in last season.

The long string of draws could mean more changes from Diego Simeone. However, at this point, it may make more sense to go with a consistent lineup rather than throwing things at the wall to see what sticks.

Koke and Yannick Carrasco remain out with knocks, while Filipe Luis reinjured his pesky hamstring in the midweek match. Lucas is likely to replace Filipe on the left as the only change in the starting eleven. Youngster Toni Moya takes Filipe’s place in the squad in his first appearance on the team sheet in La Liga play. The 18 year-old appeared off the bench in the Copa Del Rey match at Elche.

Augusto Fernandez has still not appeared in a match and could make an appearance, most likely off the bench, if Simeone wants to change the midfield.

Cristobal Parralo took up the caretaker manager position at Deportivo on October 24 after the sacking of Pepe Mel. He lines up his team in a 4-2-3-1 with Costel Pantillmon in goal and Lusinho, Sidnei, Fabian Schar, and Juanfran across the back line from left to right. Guilherme and Carlos Borges are the deep-lying midfielders with Zakaria Bakkali, Frederico Valverde, and Fede Cartabia in the more forward roles. Lucas Pérez is the lone striker.

Atletico must focus on steady defense and continue the shot bombardment to seal their first win in four matches. With Valencia and Barcelona hosting Leganés and Sevilla respectively, Atleti could have a chance to take advantage of dropped points. They must capitalize either way to continue to fight for the La Liga title. 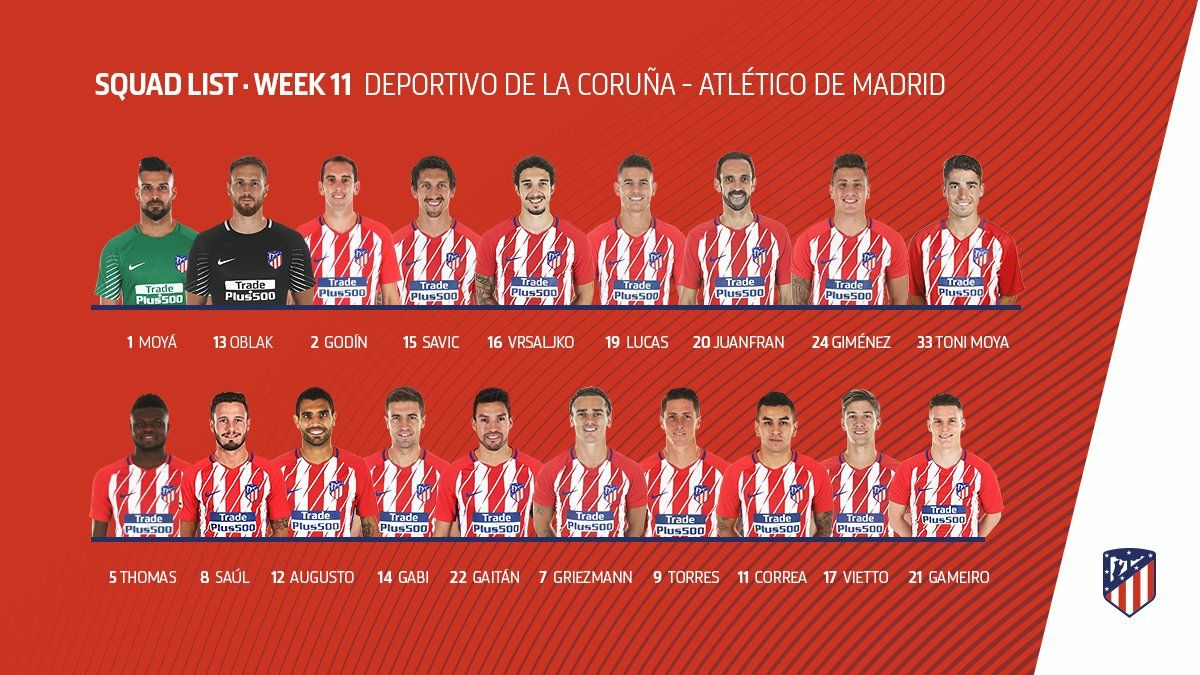