After an even and nervy 0-0 draw against their bitter crosstown rivals, Atletico returns to Champions League play on Wednesday with a home match against Roma.

Kickoff is set for 20:45 local time in the Spanish capital.

Despite drawing seven of their last nine matches in all competitions, Atletico is still right in hot contention for the third Champions League group stage spot in La Liga. They are tied on points with Real Madrid at 24, with only three goals separating the two teams.

Sevilla (22 points) and Villareal (21) are breathing down their necks while Barcelona (34) and Valencia (30) have gained some separation in the top two spots.

The Champions League has been a struggle, however, as Atletico is yet to win a match and sits third in Group C with just three points from draws home and away against Qarabag and at Roma.

A knockout stage birth is a bit unrealistic as Atletico must win out and also hope for Qarabag to get at least draws in their matches vs. Chelsea and at Roma. Instead, the red and whites are focusing on sealing up a Europa League spot with a third-place finish.

Roma, on the other hand, lead Group C and have already clinched a spot in the knockout phase. Their stellar record of two wins and two draws means a win would clinch a top-eight seed for the round of 16 draw.

The Italian side sits fourth in Serie A on 30 points, just five behind leaders Napoli with a game in hand. Manager Eusebio Di Francesco came in after guiding Sassuolo to their first ever Europa league spot and has put together one of the best sides in Europe. They have won six straight in all competitions and have only dropped points four times this season, draws vs. Atleti and at Qarabaq, and losses vs. Inter and vs. Napoli.

The two teams played to a cagey 0-0 draw last time out. Atleti outshot Roma 20-11, but were unable to find the back of the net.

Filipe Luis’s return from injury means Atlético is fully fit for this match. However, Stefan Savic was sent off against Qarabag and is serving a one-game suspension. Expect a similar team to the one that played Real Madrid, with either Gimenez or Lucas filling in for Savic in the middle and Filipe possibly joining the team at left back.

Alessandro Florenzi picked up a slight knock at the weekend and will miss the match alongside Rick Karsdorp and Patrick Schick. Di Francesco uses a 4-3-3 formation with Alisson in goal and Aleksandar Kolarov, Juan Jesus, Kostas Manolas, and Bruno Peres along the back line. Kevin Strootman, captain Daniele De Rossi, and Radja Nainggolan are the midfielders with Diego Perotti, Edin Dzeko and Stephan El Shaarawy in the forward positions.

Edin Dzeko leads the team with 10 goals and eight different players have scored this season.

This is a matchup of two stellar defenses as Roma has allowed just 12 goals in Champions League and Serie A or 0.75 per match. Atletico is just a bit better, having allowed just seven goals in their 16 domestic and Champions league matches, 0.44 per match.

The steady defense that earned Atletico two straight clean sheets will be imperative against a Roma team that does not allow many goals. The counterattack must also continue to produce quality shots to give the red and whites a chance at getting one over the group leaders. While European play looks bleak for the red and whites, anything can happen and a win against Roma would definitely boost the morale of the side. 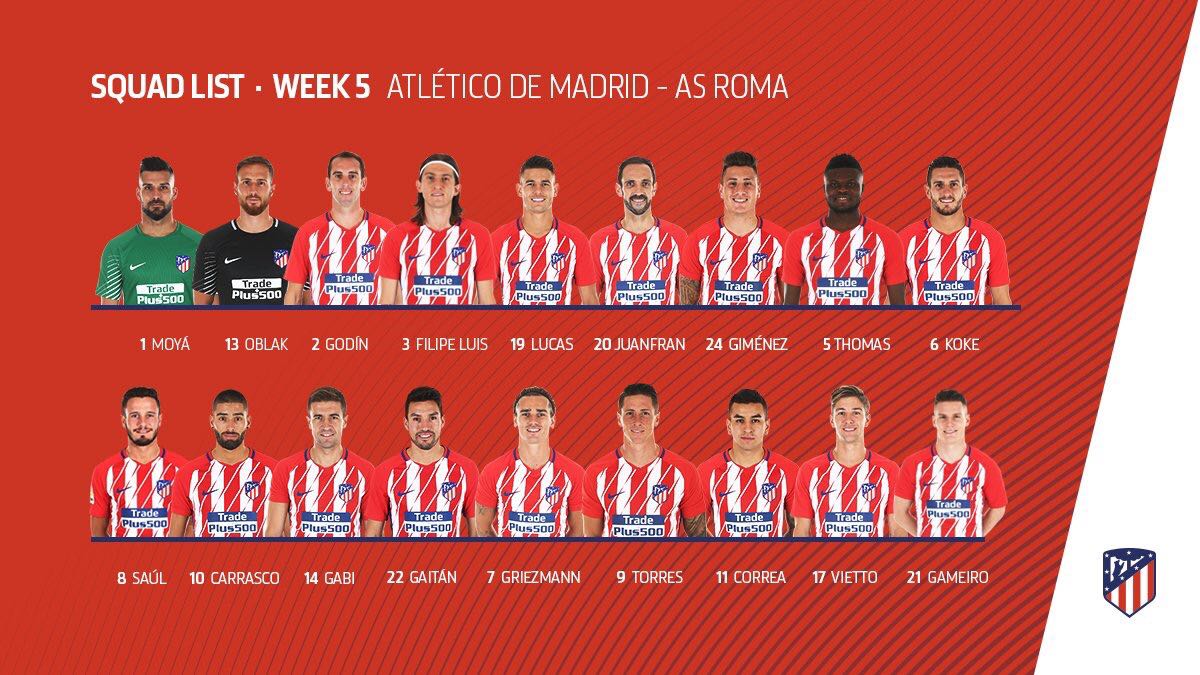