Coming off three consecutive moral-boosting wins, all by two or more goals, Atleti looks to continue the streak this Saturday as they welcome Real Sociedad to the Spanish Capital.

Kickoff is set for 16:15 local time in the Wanda Metropolitano.

After exploding for a 5-0 win over Levante in which Kevin Gameiro and Antoine Griezmann scored two goals apiece, the red and whites remain tied with crosstown rivals Real Madrid, both on 27 points for third in La Liga.

They are only four points off second place Valencia (31 points) and eight off Barcelona (35), who both dropped points when they drew 1-1 on November 26th.

A 2-0 win over Roma on Tuesday assures Atleti of at least a Europa League spot and they remain in the hunt for a miracle Champions league knockout stage position. The red and whites would need to combine a victory at Chelsea on Tuesday with a Roma loss or draw home against Qarabag.

Atletico also comfortably won their Copa del Rey tie, 3-0 over Elche at home, and 4-1 on aggregate. The Atletico defense did not allow a goal for the fifth straight match, as Jose Gimenez struck first followed by two goals from home favorite Fernando Torres to secure the victory and a spot in the last sixteen.

But for now the focus turns back to La Liga as formidable opponents Real Sociedad make a trip to the nation’s capital. Despite bowing out of the Copa Del Rey with a loss to third tier team Lleida Esportiu, the whites and blues are in pretty good form, at 3-2-1 in their last six.

Third-year manager Eusebio Sacristán guided his team to a 6th place finish and their first Europa league qualification since 2013-14 last year. The additions of Adnan Januzaj and Diego Llorente have led the team to a solid 2017-18 campaign as well. They sit seventh in the table, on 19 points, just two off Villareal for 6th and Europa League qualification.

Real Sociedad have already qualified for the knockout stage of the Europa league with one game remaining, and have only dropped points once, in a 3-1 defeat at Zenit St. Petersburg. A win over the Russians on Thursday would clinch the group.

Willian José leads all Real Sociedad goalscorers with ten goals in all competitions and Álvaro Odrozola paces the team with four assists.

Over the last 25 meetings between these two teams, Atletico leads the series 14-9 with two draws. The home team won both matches last season, as Real Sociedad took a 1-0 lead at the Anoeta with a Carlos Vela penalty in the 54th minute, before Willian José secured the 2-0 victory with a penalty of his own in the 75th. Filipe Luis scored the lone goal in the return match at the Calderón, as Oblak kept a clean sheet for the 1-0 victory.

Juanfran is still struggling with a hamstring problem that he picked up against Real Madrid two weeks ago. That should mean Thomas Partey continues on the right of an otherwise fully fit squad for Diego Simeone.

Expect a similar team to the 4-4-2/4-3-3 hybrid that defeated Levante 5-0 last weekend. Oblak will be in goal, with Filipe Luis, Diego Godín, Stefan Savic, and Thomas Partey manning the back line. Koke, Saúl Ñiguez, and Gabi are the true midfielders with Antoine Griezmann and Ángel Correa given the ability to move back and forth between midfielder and forward positions as needed. Kevin Gameiro is the only out-and-out striker.

Imanol Agirretxe remains out for the away side with a hamstring injury and Diego Llorente must serve a suspension for accumulating too many yellow cards. Adnan Januzaj is battling a minor illness, but should be fit by Saturday afternoon.

Sacristán will likely revert to his traditional 4-3-3 system with Gerónimo Rulli in goal. Kévin Rodrigues, Aritz Elustondo, Iñigo Martínez, and Álvaro Odriozola man the back line with David Zurutuza, Asier Illaramendi, and Xabi Prieto in the midfield. Mikel Oryazabal, Willian José, and Adnan Januzaj are the forwards.

Barcelona and Sevilla host Celta Vigo and Deportivo while Real Madrid and Valencia travel to Athletic Bilbao and Leganes, respectively. Atletico have the toughest fixture among the top five, but may still be able to capitalize as Spanish play has proved unpredictable this season.

Real Sociedad’s stellar attack, which places third in La Liga with 27 goals scored will give Atleti’s defense plenty to work with. However, their defense has also allowed 24 balls into the back of the net, meaning this could turn into a slugfest. If Atletico continues the stingy defense that has led to five straight clean sheets including four victories, they should earn another solid result on Saturday. 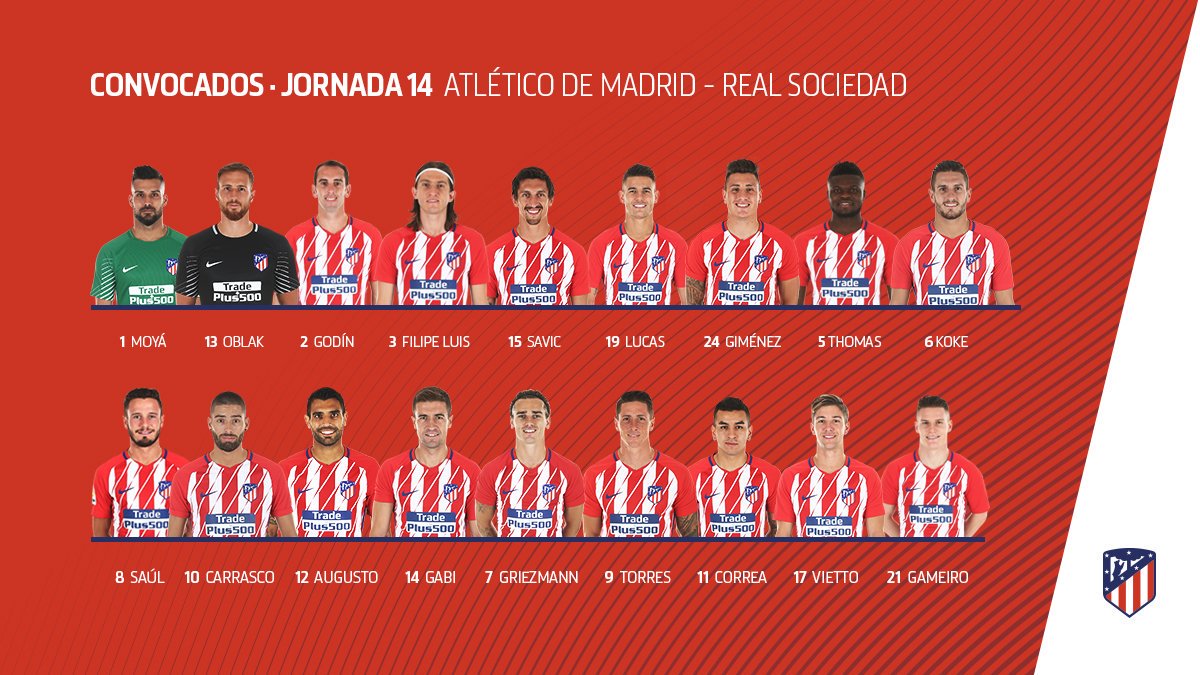