“Nine points? Nine points is nothing.” Those were the words of my Italian uber driver (a Juventus supporter) when I told him that my favorite team, Atlético, sat nine points behind Barcelona in La Liga. He reassured me that we’re only halfway through the season (not even with 17 of 38 weeks played) and that Barca’s lead could easily fall apart and Atleti were right on their heels.

This is news to me. After Atletico’s loss to Espanyol and Barcelona’s win in the Santiago Bernabeu, ESPN’s Soccer Power Index all but declared the Blaugrana champions. They gave them a 96 percent chance of winning La Liga despite 21 games to be played.

Despite the triumphant return of Diego Costa, who scored six minutes into his first game back in the red and white, Atleti have a tough road ahead in La Liga. However, they cannot give up this early. In the words of Luis Aragones, Atleti must “ganar y ganar y volver a ganar” or “win and win and win again”. Then they would also need the luck of Barcelona dropping nine or more points. They cannot speculate or give up, they must simply win and see what happens.

The campaign starts in earnest at the Wanda Metropolitano on Saturday, as Madrid community rivals Getafe travel to the capital. Kickoff is set for 13:00 CET.

Atletico’s recent 1-0 loss to Espanyol ended a four-game domestic win streak, although the team’s form was declining as they needed late goals in two of their last three victories. The holiday break should have given the team some much-needed rest and will prepare them for the 2018 slate of game.

Saturday’s opponent, Getafe, sit eighth in La Liga despite only two wins in their last six matches. Their 6-5-6 record reflects an inconsistent season in which they never won lost or drew more than two consecutive games. Most recently, Getafe ended the 2017 campaign with a 2-0 victory over Las Palmas, with Cala and Amath Ndiaye both scoring before the 15th-minute mark.

Vicente Guaita kept his fifth clean sheet of the season, a record that includes blanks against third-place Valencia and sixth-place Villareal. But a loss to Girona and a draw vs. Eibar right before that result make Saturday’s match anyone’s guess.

Atletico have won 17 of their last 29 matches with Getafe, while drawing eight and losing only four games. The teams most recently played a 0-0 club friendly on August 11. They did not play last season as Getafe had been relegated to the second division, but Atletico won the last two competitive matches in the 2015-16 campaign.

Antoine Griezmann scored early in the fourth minute at the Vicente Calderón and followed up with a 90th-minute goal for a 2-0 win. Fernando Torres scored in the 2nd-minute of the away fixture for a 1-0 victory.

As mentioned, Diego Costa will probably make his first La Liga start since 2014. Filipe Luis remains out with a hamstring injury and Koke picked up a knock meaning Luis Hernandez and Yannick Carrasco will push for starts. Saúl will also miss this match as a result of yellow card accumulation, freeing up a spot for Augusto Fernández.

Markel Begara remains out with a meniscus tear, but he is the only injured player for second-year manager José Bordalás. He will likely start a 4-4-2 lineup with Vicente Guaita in goal and Vitorino Atunes, Juan Cala, Djene Dakonam, and Damián Suárez across the back line. Amath Ndiaye, Sergio Mora, Mauro Arambarri, and Francisco Portillo are the midfielders and Jorge Molina and Ángel Rodriguez man the striking positions. Rodriguez leads all scorers with six goals.

Obviously, Getafe is not Lleida Esportiu, but if Atleti can bring the same attacking mentality that the B+ team brought to Camp d’Esports on Wednesday, they should have no problem defeating Getafe. Barcelona and Valencia host Levante and Girona, respectively, meaning Atletico once again have the hardest fixture and will need a win to keep pace with the rest of the top three. 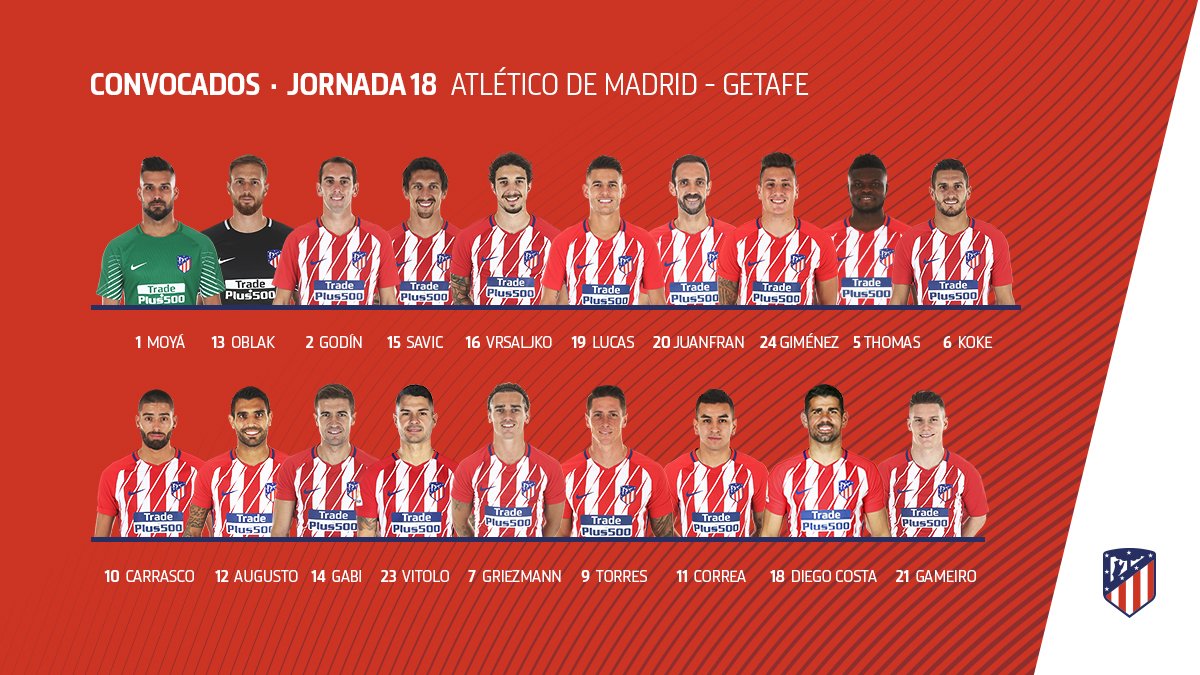