Ángel Correa and Diego Costa scored goals in the 18th and 68th minutes, and Atlético got a gritty 2-0 win over Getafe in a match that involved 10 yellow cards, including seven for the home side.

The rojiblancos may have come away with the win, but now must play their next game without Diego Costa, Stefan Savic, or Gabi who all face one-match suspensions. Costa saw yellow twice on Saturday, and Savic and Gabi have now accumulated five yellow cards this season.

Atletico also took care of business in the second leg of their Copa del Rey tie on Tuesday, winning 3-0 to best third tier Lleida Esportiu 7-0 on aggregate. Yannick Carrasco and Kevin Gameiro featured alongside Vitolo on the scoreline, who scored his first goal in red and white.

That win made it three of three for Atleti in 2018, and the nine goals scored so far from eight different players may mean the 2017 attacking problems are a thing of the past. The team has also kept all three opponents scoreless and only trails Barca in goals allowed with just eight on the La Liga season. Without Gabi to set things up and defend or Costa to score the goals, however, Eibar could prove a real test, especially with rain in the forecast.

Kickoff is set for 18:30 CET in the Ipurua Municipal Stadium. Seating just over seven thousand spectators, the Ipurua is the smallest stadium in La Liga and provides the most intimate setting in Spain’s top flight.

Eibar have rocketed up the table to 7th, sitting just five points outside the top four. After losing seven of their first eleven matches, including a 6-1 drubbing at Barcelona and a 4-0 loss vs. Celta Vigo and falling into the relegation zone, Eibar came back from the November international break a completely different team. They proceeded to win six of their next seven, only faltering in a 0-0 draw at Getafe and allowed no more than one goal each match.

Most recently, Eibar went down 1-0 at Las Palmas on a 32nd-minute Jonathan Viera penalty and looked on pace to lose their first match since November 5. However, super sub Fabián Orellana came on in the 71st-minute and scored just two minutes later. Sergi Enrich followed with a 77th-minute goal to set up the 2-1 victory. Charles, the team’s leading goal scorer so far this season with six, got an assist on the score sheet.

Eibar has only played in the top flight since 2014, meaning just 12 matches against Atlético. The red and whites have dominated the series 9-1, with two draws also on the books.

The teams did not meet until January in the 2016-17 campaign when Saúl Ñiguez and Antoine Griezmann scored second-half goals and combined for the 2-0 victory.

The teams then drew each other in the Copa Del Rey quarterfinals where Atletico won 5-2 on aggregate. Griezmann, Correa, and Gameiro scored at home before Jose Gimenez scored at the Ipurua to give Atletico a 4-0 overall lead. Enrich and Pedro León put Eibar on the scoreboard late in the second match, but it was too little too late as Juanfran sealed the Atleti victory.

Eibar got a chance for redemption in the Calderón on May 6th, but Saúl dashed those hopes once again with a 69th-minute goal.

Filipe Luis and Nico Gaitan are the only two injuries for the away side, nursing hamstring and muscle problems, respectively. Diego Costa, Stefan Savic and Gabi all face suspensions for Atletico meaning Kevin Gameiro, José Gimenez, and Thomas Partey should gain spots in the team. Saúl is also likely to rejoin the team after serving a suspension last weekend. Youngster Robert Olabe del Arco was also listed in the squad for the first time this season, although he did make an appearance off the bench in the 2016 Copa Del Rey.

Eibar’s small squad and bad luck have left them with more injuries than Atleti and they will miss center back Ivan Ramis (abductor tear), left back David Juncá (muscle injury), keeper Yoel Rodríguez (cruciate ligament rupture), right winger Pedro León (knee) and center midfielder Fran Rico (knee) in this match. Right back Anaitz Arbilla will also not be in the squad as he serves a yellow card suspension.

Jose Luis Mendilibar is in his third consecutive season at the helm of Eibar, having also managed them in the 2004-05 season. The team has steadily improved since gaining promotion, moving from 18th to 14th to 10th in the league. Mendilibar will most likely start a 4-4-2 with Marko Dmitrovic in goal. José Ángel, David Lombán, Paulo Oliveira, and Ander Capa man the back line with Takashi Inui, Dani García, Joan Jordán, and Iván Alejo across the midfield. Charles and Sergi Enrich are the strikers.

Atleti’s versatility and flexibility will be tested this weekend as they try to take down one of La Liga’s hottest teams with a suspension-depleted roster. However, having eight different goal scorers over their last three games means other players can step up.

The rojiblancos must put up their best performance as Barcelona will also be in the Basque country, facing a Real Sociedad team that has only won one of its last six matches. Only a win will keep the Blaugrana lead at a steady nine points. 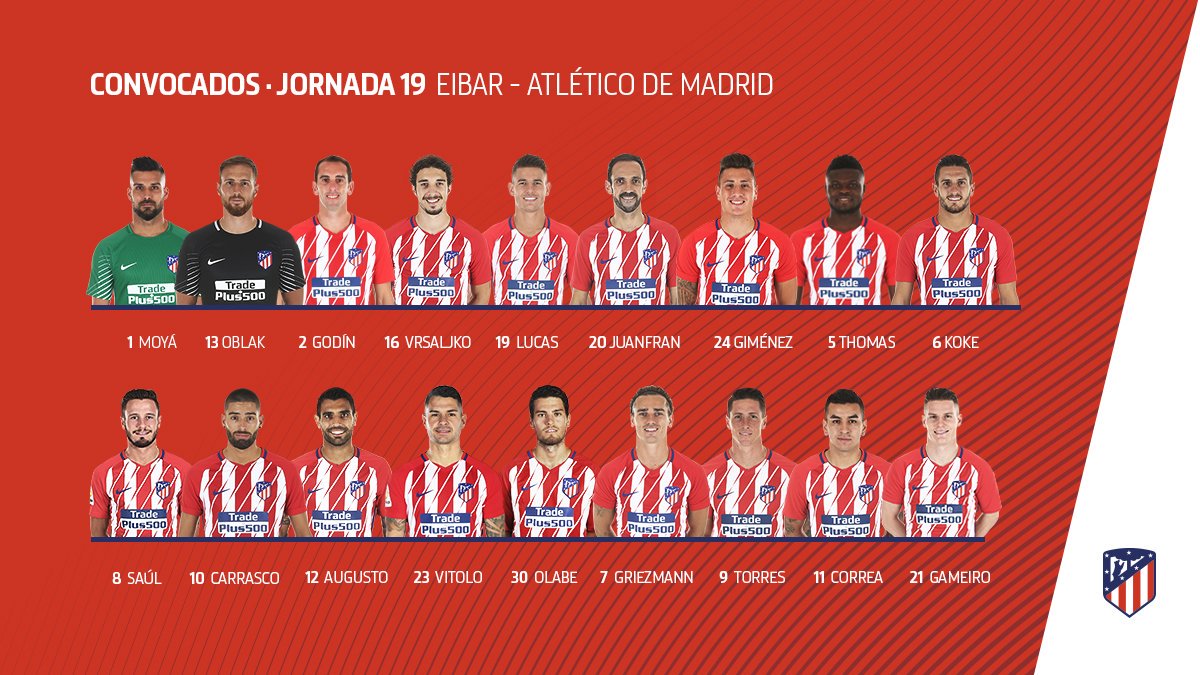