Antoine Griezmann’s pass found a wide open Kevin Gameiro who slotted it into the net and Jan Oblak recorded his 18th clean sheet in all competitions for a 1-0 victory.

Barcelona and Valencia also won their matches meaning Atletico remains nine points behind Barca and two over Valencia for second place after 19 matches.

The focus now turns to the Copa Del Rey and the first of two quarterfinal legs against Sevilla. Atletico will host the first leg on Wednesday, with the teams returning to the Ramón Sánchez Pizjuán on January 23.

Kickoff is set for 19:00 in the Metropolitano.

Sevilla have faltered lately, falling to sixth in the table, three points behind fourth place Real Madrid, who have a game in hand. They have not won a La Liga match since December 12th, a stretch that includes a draw vs. Leganés and losses to Real Sociedad, Real Betis, and Alavés.

The problems have also not always been the same. At first Sevilla could not score in a 0-0 draw, then they had trouble defending losing 1-3 and 3-5 before another shutout 0-1 loss.

The poor league form has not carried over into the cup, as Sevilla won both legs to take care of second-tier Cadiz in the round of 16.

First-year manager Eduardo Berizzo was sacked for the club’s fifth-place standing on December 22nd, but newcomer Vincenzo Montella (who just lost his job at AC Milan) has lost both La Liga matches.

Two of the oldest clubs in La Liga, Atletico and Sevilla have a storied rivalry. The colchoneros lead the last 33 games 14-11 with eight draws.

The teams already met once this season, with Yannick Carrasco and Griezmann scoring in the second half for a 2-0 home win. Sevilla defeated Atlético 1-0 in the Ramón Sánchez Pizjuán last season, on a late Steven N’zonzi goal, but Atleti responded with 3-1 victory featuring goals from Diego Godín, Griezmann, and Koke.

Filipe Luis and Nico Gaitan continue to miss time for the home side with hamstring and muscle injuries. However, Diego Costa, Stefan Savic and Gabi will all return from one-game suspensions. Miguel Ángel Moyá will receive the cup start in goal and Alex Werner joins the squad as his backup.

Cup lineups can be hard to guess because of rotation in the short week, but Montella last used a 4-2-3-1 with Sergio Rico in goal. Gabriel Mercado, Pablo Sarabia, Clément Lenglet, and Lionel Carole man the back line with Johannes Geis and Guido Pizarro as defensive midfielders. Jesús Navas, Éver Banega and Nolito are the attackers with Wissam Ben Yedder as the lone striker. Ben Yedder leads all Sevilla players with 14 goals on the season.

With Barcelona’s nine point lead and the unpredictability of Europa, the Copa del Rey could be Atlético’s best shot at a 2018 trophy. Sevilla’s poor form and Atleti’s recent wins should open up a spot in the semifinals. 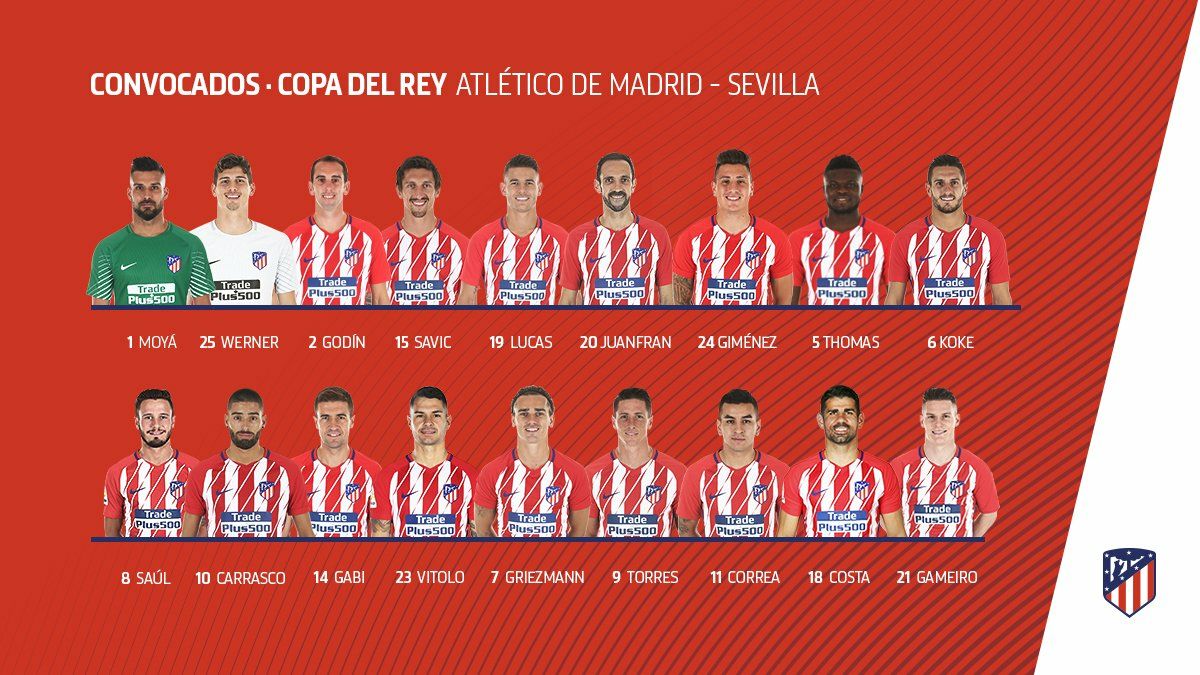