Two goals in the last 10 minutes and some dodgy goalkeeping spelled doom for Atlético on Wednesday. Diego Costa’s 75th-minute goal was not enough and now Atleti faces an uphill battle to stay in the Copa del Rey.

The focus turns back to La Liga this Saturday as Atleti host Girona in another must-win to keep their slim title hopes alive. Barcelona remains nine points ahead of the second place rojiblancos with Valencia just two points back in third.

Kickoff is set for 16:15 at the Metropolitano.

Girona have had a topsy-turvy December and January with three wins and three losses. However, two of the losses came away at third-place Valencia and at red-hot Eibar, and a rousing 6-0 win over Las Palmas means things are looking up.

The win included a Michael Olunga hat-trick, his first three goals of the season. Leading goal scorers Cristhian Stuani and Portu also scored and Borja Garcia added a goal to elevate the newly-promoted team to 10th in the table. With teams 4-15 in the table separated by just nine points, Girona’s season could go almost anywhere in the second half. They could rise as high as a Champions league spot or even have to stave off relegation.

All things considered, Pablo Machín has done a great job at Girona in the club’s first La Liga season. To elevate such a small club from the second division to the top flight’s top half is an amazing feat.

This being Girona’s first season in La Liga, the teams have only met once, at Estadi Montilivi in the first match of the season. Stuani scored twice in three minutes, but Atleti responded despite an Antoine Griezmann red card. Ángel Correa and José Giménez both scored in the last 12 minutes to force a 2-2 draw.

Filipe Luis and Nico Gaitan remain out of the squad for the home side with hamstring and muscle injuries. Diego Godín will also miss the match after accumulating his fifth yellow card of the season. However, Diego Costa, Stefan Savic, and Gabi will all return to league play from one-game suspensions.

Girona center backs Pedro Alcalá (ankle), and Marc Muniesa will both be out with ankle injuries. Machin has an otherwise healthy 3-4-2-1 with Bono in goal. Juanpe, Bernardo Espinosa, and Jonás Ramalho man the back line with Johan Mojica, Àlex Granell, Pere Pons, and Aday Benítez across the midfield. Borja García and Portu play behind Stuani in the forward roles.

With Barcelona traveling to surprising seventh-place Real Betis, this weekend could give Atleti a chance to close the gap to first place. A pretty much full squad means Atleti cannot afford more slip-ups as the La Liga window continues to tighten. If they continue to follow Simeone’s “partido a partido” mantra, the wins and perhaps even a title shot will come. 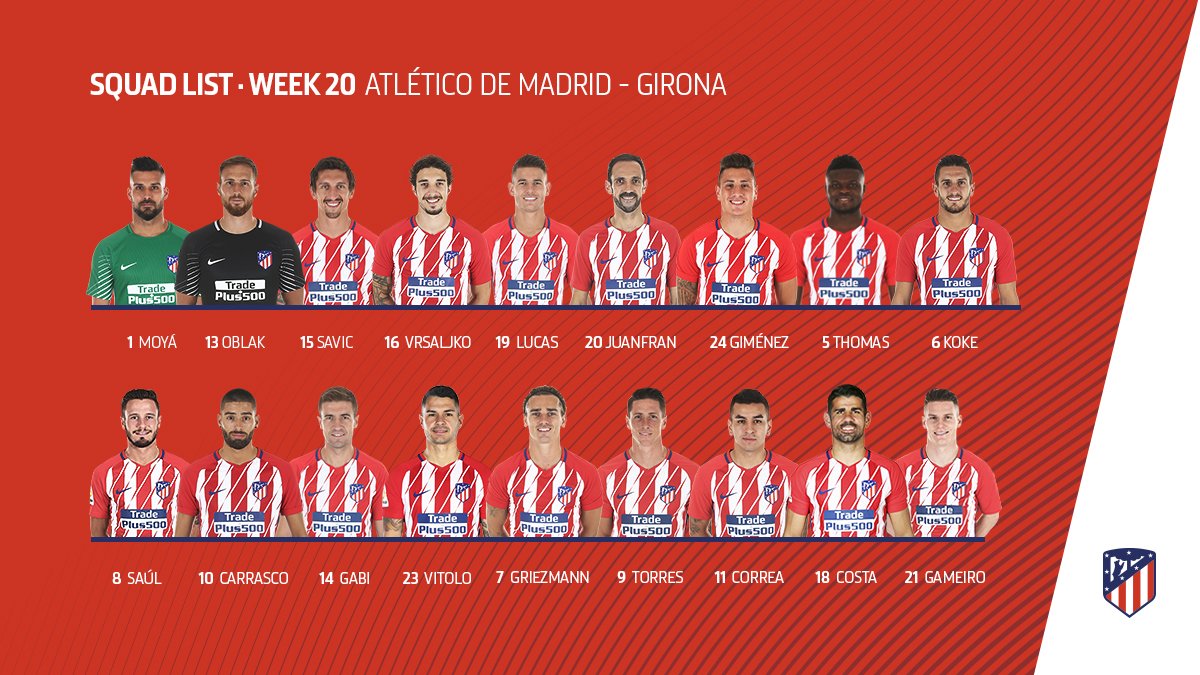