Diego Costa and Antoine Griezmann combined for a 34th-minute goal and Atlético Madrid looked on their way to another gritty 1-0 win.

Diego Simeone subbed off both strikers and let off the pressure, looking ahead to a second leg Sevilla match in which Atletico needed a victory to stay alive.

Portu scored just two minutes after Griezmann’s exit and a depleted Atleti could not get the goal back. The 1-1 draw sent them 11 points adrift, all but out of the La Liga title race.

Of course, this is not the result anyone wanted. But on a short week, Atleti must forget it and move on. After a disappointing 1-2 loss to Sevilla at home, they need a win, and likely a win by two goals in the Ramón Sánchez Pizjuán.

The Copa del Rey decides its fixtures by aggregate score and the away goals rule. Therefore, Atleti must win but a 1-0 victory would still send Sevilla forth to the semifinals. A 2-1 scoreline would force extra time, and any other victory (2-0, 3-1, or 3-2 for example) would result in Atleti advancing.

Sevilla lost their first two La Liga matches under Vincenzo Montella, but they now seem to have learned and bought into his system. Wednesday’s win could be a turning point in their season as they followed it up with a 3-0 league victory over Espanyol.

Franco Vasquez, Pablo Sarabia, and Luis Muriel scored, showing off the team’s many weapons. After the win, Sevilla sits sixth in the table, just three points out of the top four.

Two of the oldest clubs in La Liga, Atletico and Sevilla have a storied rivalry. The colchoneros lead the last 34 games 14-12 with eight draws.

Sevilla won the first leg of this quarterfinal fixture in which the game remained scoreless until the 73rd minute. Diego Costa struck first for Atleti, but defensive mishaps led to a Jesus Navás strike just seven minutes later. Joaquin Correa broke the tie in the 88th minute, giving Sevilla the lead and more importantly two away goals.

Nico Gaitan and Filipe Luis continue to miss time for the away side. Simeone has called up Jan Oblak for the first time in a 2018 cup match, meaning the Slovenian goalkeeper is likely to replace Moyá in goal.

Center backs Daniel Carrico (muscle injury) and Nicolás Pareja (osteitis pubis) continue to miss time for Sevilla. Simon Kjaer returns to the squad list after dealing with back problems, but will probably come off the bench. Montella has shuffled his lineups a lot lately, but has stuck with a 4-2-3-1 formation.

In the first leg he started Sergio Rico in goal with Sergio Escudero, Gabriel Mercado, Clément Lenglet, and Sébastien Corchia across the back line. Éver Banega and Steven N’Zonzi were the defensive midfielders and Pablo Sarabia, Franco Vázquez, and Joaquín Correa played the forward roles.  Luis Muriel was the lone striker.

Manager Diego Simeone expressed high hopes for his club, saying “It will be an intense and beautiful match. The Copa del Rey is exciting. We’re going to try to advance to the next round.”

His aspirations are not unfounded because Atletico is unbeaten in their last nine away cup matches.

Semifinal qualification is still a possibility, but it will take Atleti’s best effort. This Sevilla club showed vulnerability under Berrizo, and Atleti has rallied from first leg losses before. The away attack will need to start strong and not let up for the full 90 minutes to earn a spot in the Copa del Rey semifinals. 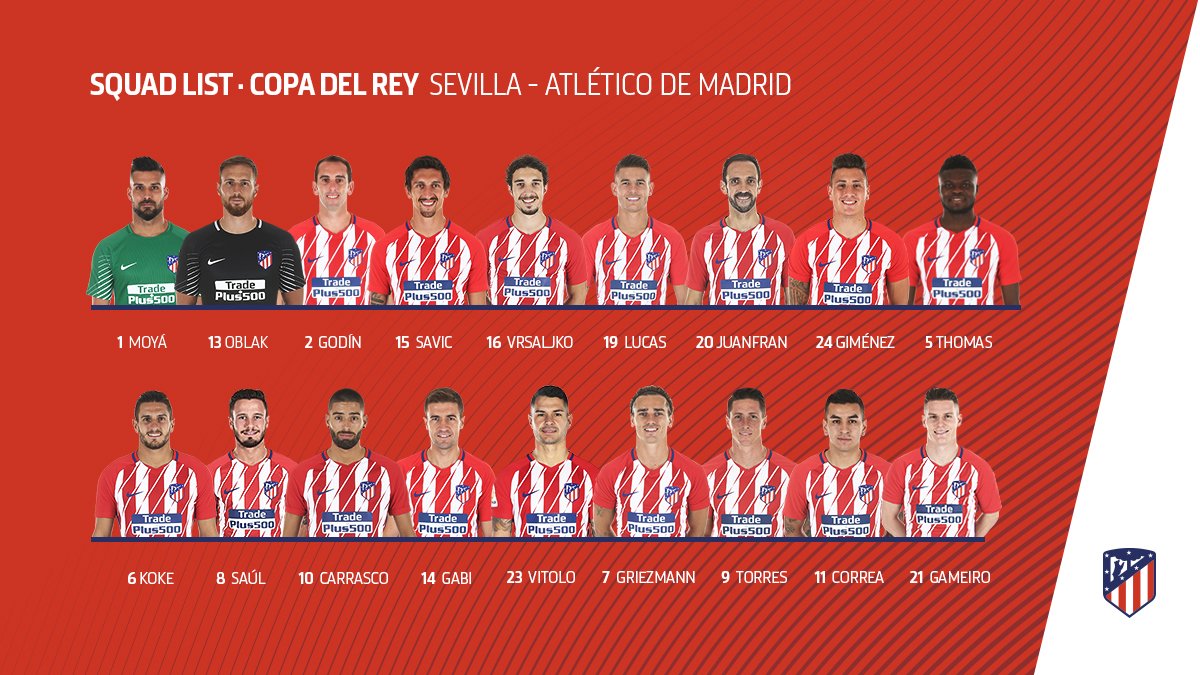