After bowing out of the Copa del Rey, Atletico secured a much-needed win to improve team morale, 3-0 over second from bottom Las Palmas. The rojiblancos waited until the 61st minute to unleash the goals, but they came in droves. Griezmann, Torres, and Partey found the back of the net as Atleti held fast to second in La Liga.

With a 12-point gap to first place Barcelona and a six-point drop to Valencia in third, it would be easy for Atleti to just coast for the rest of the domestic season. But coasting has never been Simeone’s mantra. Instead, the goal will be to narrow the gap to Barca as much as possible.

If nothing else, the team should try to improve on last season’s 78-point total and third place finish. They are currently on pace for 83 points, so a 90 point season is in the realm of possibility. Atleti can show the world that if not for a close to perfect Barcelona, they could have won the title in 2018.

The campaign continues Sunday vs. Valencia. Kickoff is set for 19:45 in the Metropolitano.

Marcelino has Valencia in the midst of their best season since at least 2011-12, at third place in the league. However, their lead is just two points over Real Madrid, who have a game in hand. Therefore, they should be going all out for the win on Sunday.

Valencia is also not in the best form, however. They have lost four straight in all competitions. Even if two of those were to Real Madrid and Barca, they are not the same team that ran off nine straight wins earlier this season. Still, they are definitely an attacking threat, sitting third in the league in goals scored. Simone Zaza (10 goals), Rodrigo Moreno (9), and Santi Mina (8) are all top ten La Liga scorers.

Atleti’s job will be once again to win with defense. Their league-leading nine goals allowed is no match for Valencia’s 25.

The teams drew their last meeting, early this season at Valencia. Both defenses held tight, forcing a 0-0 scoreline despite twenty shots split 11-9 in favor of Atleti.

Filipe Luis continues to miss time with a hamstring injury. However, Diego Costa will return to the lineup after missing the Las Palmas match with muscle problems. Yannick Carrasco could push for another start on the wing as Simeone continues to figure out his best midfield.

Valencia is not nearly as lucky as Atleti on the injury front, missing five players. LW Goncalo Guedes, CM Geoffrey Kondogbia, and CB Ezequiel Garay are the latest additions to a report that already included LW Andres Periera and CB Jeison Murillo.

Marcelino usually employs a 4-4-2 and should place Neto in goal. José Gaya, Garay, Gabriel Paulista and Martin Montoya will man the backline with Nemanja Maksimovic, Daniel Parejo, Kondogbia and Carlos Soler in the midfield. Santi Mina and Zaza are the lone strikers. However, it would not be surprising to see Rodrigo Moreno or even former Atleti player Luciano Vietto in forward roles.

After Barcelona’s 1-1 draw at Espanyol, Atletico have a chance to make up ground. However, defeating one of La Liga’s most surprising and potent offenses will not be easy. If the team can focus on its mantra of careful defense and strong counterattack, a win will be on the cards. 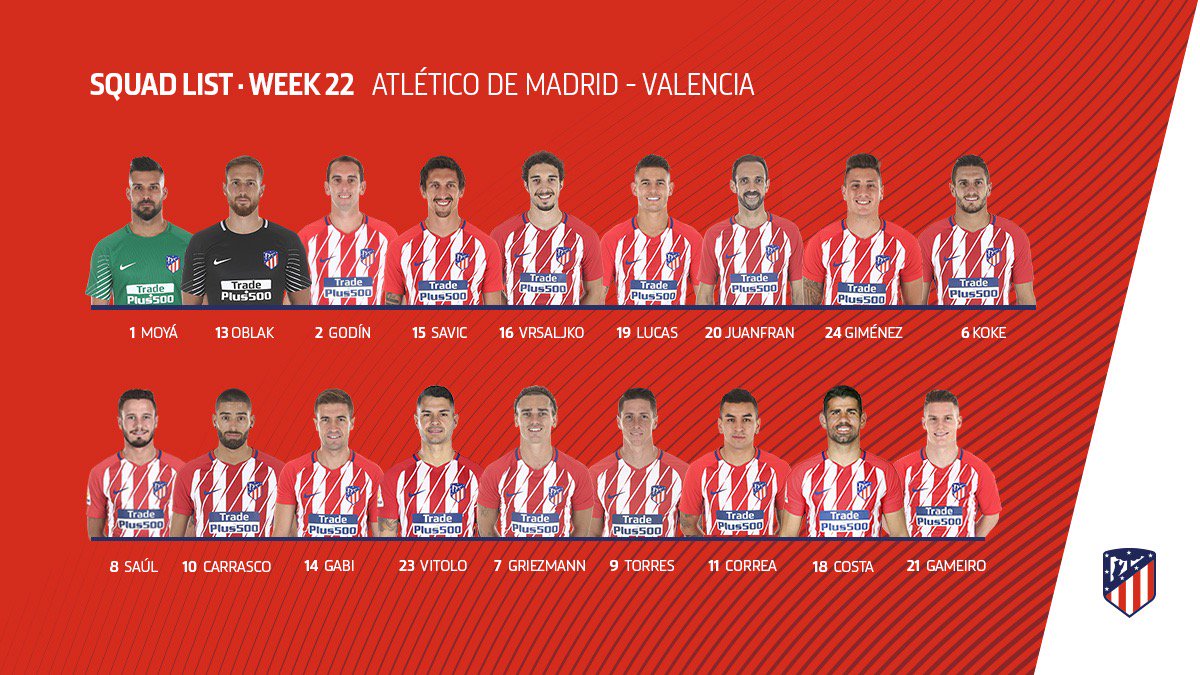