Antoine Griezmann started the scoring early and the Atlético defense held on for its fourth straight clean sheet in a 1-0 victory over Málaga.

The win, coupled with Barcelona’s second straight draw in La Liga, brings Atleti to just seven points behind the Blaugrana. The title is within reach with fifteen matches remaining.

However, the club is also alive in Europe, back in the Europa League for the first time since the 2012-13 season. The knockout stage starts with a match at FC Copenhagenn on Thursday.

Kickoff is set for 21:05 local time in the Danish capital. The match is the first of two legs, with the return match scheduled for February 22 in the Metropolitano.

Atletico’s poor play in the Champions League meant they could not get out of the group stage for the first time since rejoining the competition in 2013-14.

Champions of the Danish Superligen the last two seasons, Copenhagen have struggled domestically in 2017-18. They are currently 8-5-7 in the league and 18 points behind leaders Midtjylland in fourth place.

Copenhagen advanced to the Europa league knockout stage by finishing second in their group. They went 2-3-1, amassing nine points, and won the head-to-head tiebreaker over Sheriff Tiraspol.

Copenhagen is not in great form lately, having split their last two matches since Danish teams returned from the two month winter break.

The teams have only met once before, in the 2007-08 UEFA Cup. A Diego Forlán penalty and an own goal from Copenhagen’s Jamie Langfield gave Atleti the 2-0 win.

Stefan Savic continues to miss time with hamstring problems, and Diego Costa (muscle injury) will join him on the sidelines. Diego Godín should return to the lineup. Diego Simeone has used the extra squad spots on keeper Alex Werner and center back Antonio Montoro.

Center back Erik Johansson (cruciate ligament), winger Zeca (suspension) and defensive midfielder Aboubakar Keita (operation) will miss the match for Copenhagen. Fifth-year manager Stale Solbakken, in his second stint with the club, employed a 4-1-3-2 in Saturday’s win over Randers FC.

Robin Olsen started in goal with Nicolai Boilesen, Peter Bengtsson, Michael Luftner, and Peter Ankersen across the back line. William Kvist was the lone defensive midfielder with Robert Skov, Zeca and Viktor Fischer in attacking positions. Andreja Pavolvic and Pieros Sotiriou played the forward roles. Soitoiru leads the team with ten league goals, but Benjamin Verbic has been the European star with three goals in the Europa group stage.

Jose María Giménez said the team was motivated for the match, “For us, the Europa league is an important challenge.” As usual, Simeone did not count out the opposing side. “Copenhagen are a tough and difficult rival and they’ll probably play with a lot of motivation in their stadium,” he said.

Atlético had a bit of trouble away in Europe this season, drawing matches to Roma, Qarabag and Chelsea. However, their recent form and gritty defense should be enough for a victory over struggling Copenhagen. 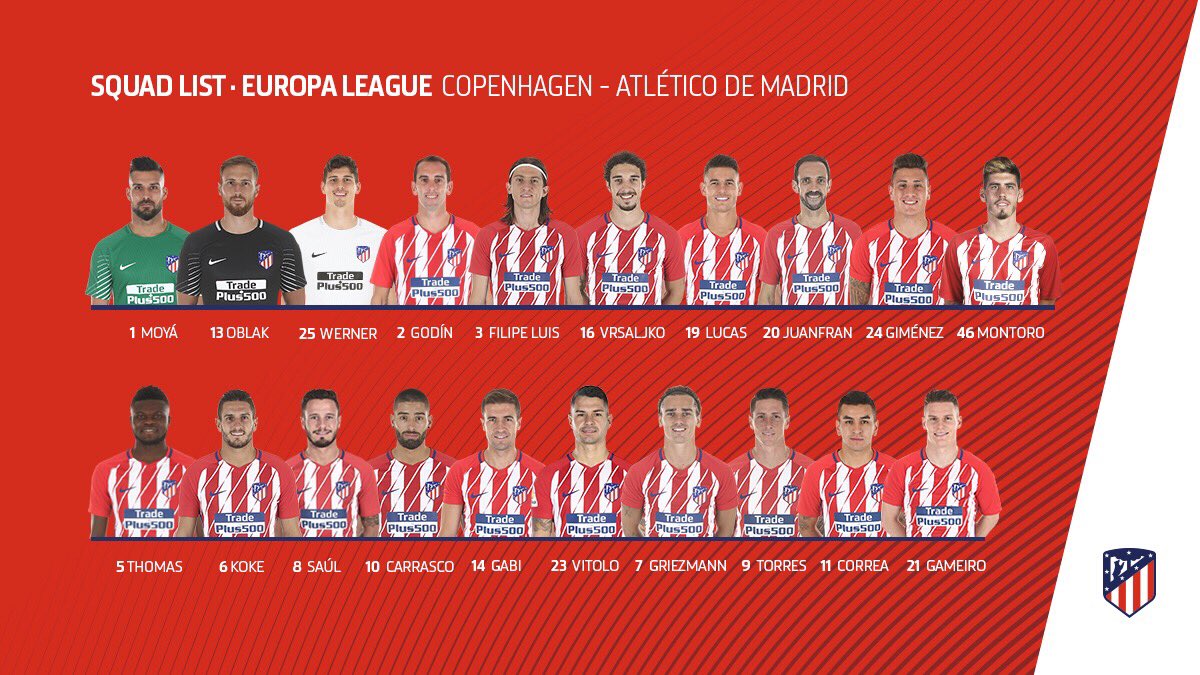