Early defensive mistakes led to an early Copenhagen goal, but Atleti quickly stormed back for a 4-1 win on Thursday. The away victory all but seals Europa League round of 16 qualification.

The grueling Thursday-Sunday schedule turns the focus right back to La Liga. Atleti return home for a match vs. parent club Athletic Bilbao this weekend.

Kickoff is set for 16:15 local time in the Metropolitano.

Barcelona’s 2-0 victory over Eibar means Atleti must win in order to keep pace. They entered the weekend seven points back of first place with just fifteen matches remaining.

Last year’s seventh-place finishers, Athletic Bilbao have struggled so far this season. They are 6-10-7, 13th in La Liga. Nevertheless, the tight standings mean that they are only seven points out of the last Europa League spot. The Basque club certainly miss former manager Ernesto Valverde, who left for Barcelona in the summer.

Atletico has dominated recent matches against their parent club. They have won 21 of the last 32 with seven losses and four draws in that span.

Athletic are winless in their last five La Liga matches, four draws, and a loss. However, they also scored a key away victory in their Europa League tie, 3-1 over Spartak Moscow.

The teams last met in September, a 2-1 victory for Atlético. Ángel Correa opened the scoring in the 51st minute and Yannick Carrasco followed in the 73rd minute for a 2-0 lead. Former Atlético player Raúl Garcia scored for Athletic Bilbao in stoppage time, but it was too little too late.

Stefan Savic continues to miss time with hamstring problems, but Diego Costa (muscle) and Jan Oblak (flu) will return from one game absences. Filipe Luis, Sime Vrsjalko, Gabi, and Vitolo should all push for spots as Simeone might rotate on the short week.

Aduriz paces the team with 18 goals in all competitions, but Williams leads the players available for this match with seven. Athletic have one of the better defensive records in La Liga this season; they place fifth with 25 goals allowed. However, they are also tied for 13th in attack with only 24 goals scored.

Simeone remarked, “We always play with the same intensity and excitement. [Without Aduriz and Garcia] Athletic will lose their aerial play but gain velocity. They’ll surely play with Williams up top and he’s a dangerous player.”

Rivalry matches can be tough, but Atletico should have no problem taking care of business against a weaker, thinner team. 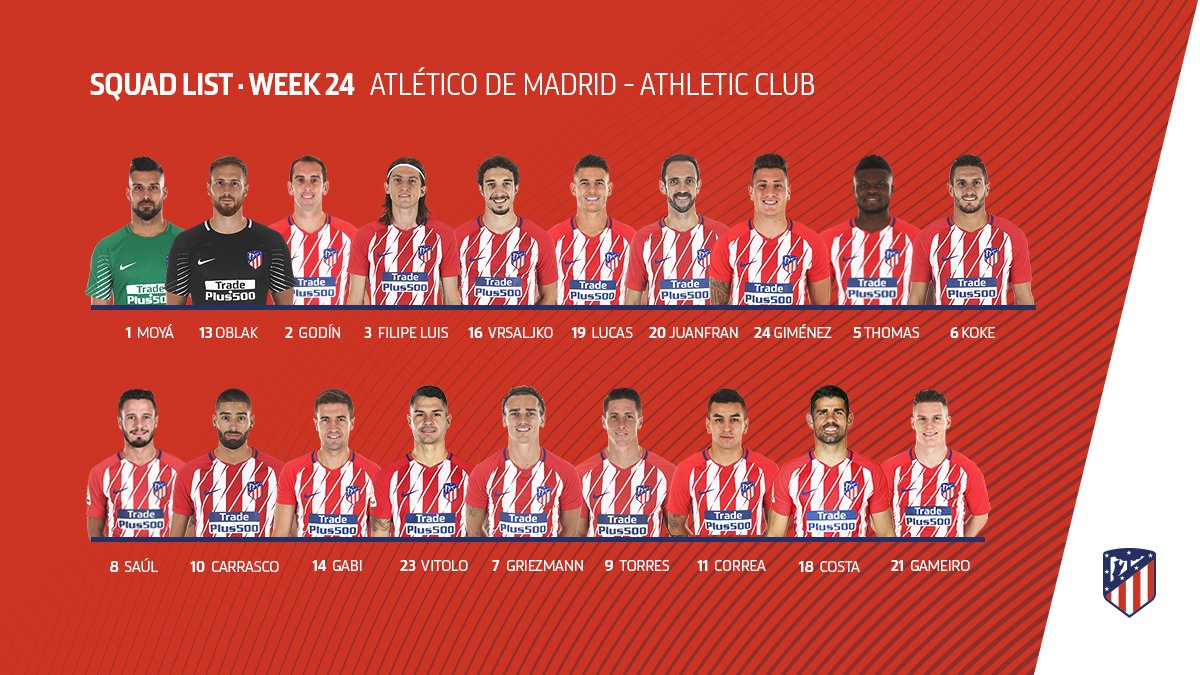