Antoine Griezmann scored his first goal in the 26th minute and didn’t hold back, slotting three more into the back of the net before time expired. The French phenom’s second straight hat trick and 15th goal of the season rockets him up to fourth in La Liga in scoring.

More importantly, Atleti is now just five points back of Barcelona for first. The double game weeks continue as the red and whites must travel to one of the toughest places to play for the biggest match of the season.

After narrowly losing La Liga by just three points last season, Barca stormed out of the gate and won their first eight matches in all competitions. They didn’t quite match that streak for the rest of the season, but they have still only lost one match and are 20-6-0 in La Liga.

Barcelona opened up an 11 point gap on Atleti as recently as January 28, but have struggled to score goals in February. The Blaugrana drew for the fourth time overall and third time in La Liga on Thursday to 18th-place Las Palmas.

They failed to bring the high-possession, high-attacking, and high-scoring brand of football that gave them a 6-1 win over Getafe just five matches earlier. That performance, in which Luis Suárez and Lionel Messi combined for five goals, shows that Barca can still turn on the attack and score goals at will. They have only dropped points at home twice this season and allowed a whopping six goals at the Camp Nou.

Atleti had a tough 2017 and looked almost out of the race just over a month ago after they dropped to 11 points back. However, since dropping out of the Copa del Rey, the colchoneros have won their last eight matches in all competitions. They are on their best form of the season and have outscored opponents 21-3 over that stretch.

Griezmann has led the way with the goals, but just as important are quality assists from Koke, Filipe Luis, and Diego Costa to name a few. Jan Oblak has also continued to dominate between the sticks, allowing just 11 La Liga goals this season. And of course, Diego Godín continues to lead the back line in front of Oblak with a rotating cast of characters due to several injuries in that part of the team.

Barcelona holds the advantage in the teams’ last 57 meetings, 28-15 with 14 draws. Atleti looked destined to win the first match this season after Saúl’s 21st-minute goal. The red and whites held the lead for 61 minutes, but Luis Suárez finally broke through for Barca in the 82nd and the score held at 1-1, Barca’s first draw of the season.

Stefan Savic continues to miss time with a hamstring injury. However, Lucas returns to the squad and could push for a starting spot, considering he has probably been the team’s best defender all season. Gabi might also push for a start after subbing in last match. Diego Simeone could choose to go with a more physical and defensive line up and game plan, as he often does at the Camp Nou.

Otherwise, Ernesto Valverde should field what has become his go-to 4-4-2 in 2018. Marc-Andre ter Stegen will man the sticks behind Alba, Samuel Umtiti, Gerard Piqué, and Sergi Roberto. Andres Iniesta, Ivan Rakitic, Sergio Busquets, and Philippe Coutinho are the midfielders with Lionel Messi and Luis Suárez in the forward roles.

Simeone did not downplay the fixture when he said, “Tomorrow’s match is an important one. We’re going to play a rival whose numbers speak for themselves.” He also described the attacking strategy a bit, “I think our transitions to get to Diego Costa are at their best when they pass through Koke, Griezmann and Correa, the players that are closest to him. This allows us to be more vertical and take advantage of Diego’s characteristics.”

Barcelona have shown recent vulnerability, but they still have one of the better records and some of the top talent in the world. They are rightly 14/19 favorites at home because the fortress in Barcelona that seats almost 100,000 is an extremely difficult place to win a match. Atleti have not won there since 2006 and must play close to perfect football to secure a victory. 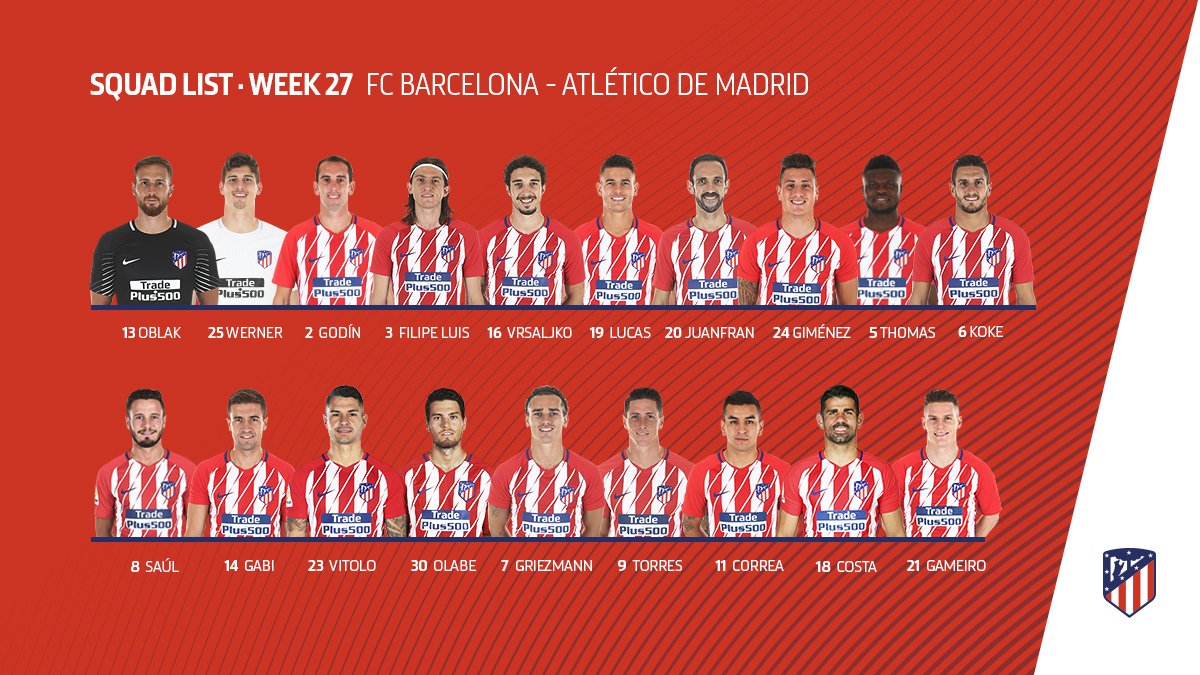