On December 5, Atletico drew their last match at Chelsea in Champions League Group C before finishing in third place, four points short of the knockout stage. The Colchoneros had missed out on the final 16 of this competition for the first time in the last five seasons.

After going from three straight years of at least reaching the semifinals, it was tough for ownership, players, coaches and fans alike to see the team bounced so early. But third place meant a new beginning in the Europa League, a competition that Atleti won in the 2011-12 season.

Win five rounds and Atleti would seize the secondary continental trophy. It’s not the Champions League, but still a very respectable competition.

After wins against Copenhagen, Lokomotiv Moscow, Sporting CP and Arsenal, Atleti has impossibly reached the final in Lyon. No one could have imagined this result after the Champions League performance which included back-to-back draws against Qarabag.

However, the job is not finished. Atleti travel to Lyon to face rival Marseille in their home country for the Europa League final.

Kickoff time is set for 20:45 local time in the Groupama Stadium.

Atleti got a much-needed home win on Saturday in Getafe. Koke scored the early eighth-minute goal and the defense held on despite 11 shots from their formidable Madrid community rivals. Jan Oblak’s 77th-minute penalty save was crucial in the winning result.

The win kept Atletico firmly in second place in La Liga, with a three-point lead over city rivals Real Madrid. Any result in their upcoming match vs. Eibar would guarantee second place bragging rights.

Marseille has had a rough time lately, winning just one match in their last four. They sit fourth in Ligue 1 and must win this weekend and receive help to finish in the top three Champions League spots. But a Champions League spot is also on the line in the Europa League final and is a direct way in for Marseille.

The team is paced by winger Florin Thauvin who leads the team with 22 goals in his first full contract with the club. He was on loan from Newcastle last season, a year in which he scored 17 times. Dimitri Payet, who rejoined the club last winter, leads with 13 assists, just two more than Thauvin’s 11.

Atletico was last paired with Marseille in Champions League Group D back in 2008. The teams played to a scoreless draw in Marseille, but Atletico won 2-1 in the Calderon. All the goals were scored in the first 22 minutes as Sergio Aguero and Raul Garcia bested Mamadou Niang for the 2-1 result.

Diego Simeone will continue to serve his touchline ban for arguing with the referees in the first leg of the semifinal tie with Arsenal. However, he and his staff will have another full squad at their disposal as all senior players are healthy.

Sime Vrsjalko will return from suspension, but Filipe Luis and Juanfran are still the favorites to start in the full-back positions as they return from injuries.

Marseille manager Rudi Garcia will be without center back Rolando (calf), while center back Adil Rami and Steven Mandanda serve suspensions.

Yohann Pele is the likely choice in goal behind a 4-2-3-1 formation. Jordan Amavi, Luis Gustavo, Adil Rami and Bouna Sarr form the back line. Morgan Samson and Maxime Lopez are the deep-lying midfielders with Lucas Ocampos, Dimitri Payet and Florian Thauvin in the more forward roles. Valere Germain is the lone striker.

Anything can happen in a final, but Atleti are still the favorites despite playing with less fan tickets, farther from home and without their coach. As Gabi expressed, they “will play this match with our head, heart and whatever else is necessary to win.” 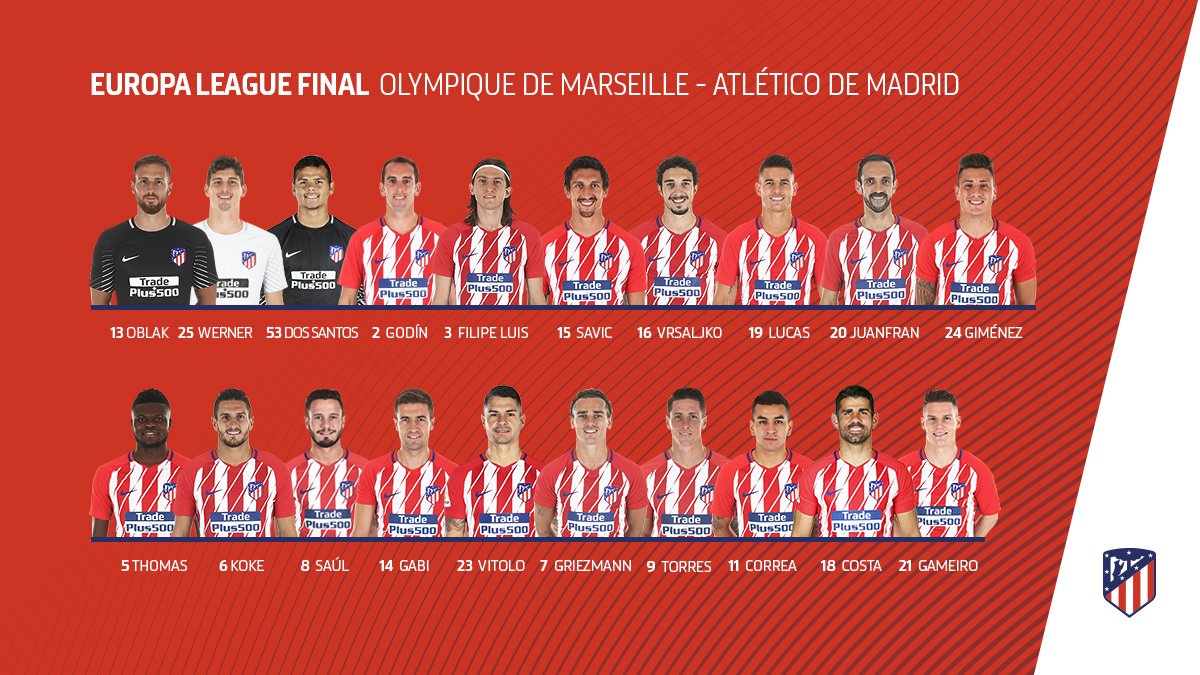