After a lackluster 1-1 draw away to Villareal, Atletico sit fifth in a tight La Liga table. Just five points separate the top nine teams in La Liga and Atletico are only two points back of first-place Barcelona.

Almost every team both in Spain and in Europe as a whole has shown vulnerability early in the season. And Atletico has a unique chance at both titles if they can string together several good runs of form over the long season. In the midst of a particularly tough stretch that includes seven fixtures over 21 days, Atletico must quickly look forward to an important Champions League match October 24 at Borussia Dortmund.

Kickoff is set for 21:00 local time in the Signal Iduna Park.

With wins in their first two Champions League matches, 2-1 at Monaco and 3-1 vs. Club Bruges, Atletico sit tied atop Champions League Group A, even on six points with Dortmund. The group cannot be won or lost in this match. However, it is certainly Atletico’s most difficult fixture in the group and probably the team’s hardest so far this season in all competitions.

Atletico has spread the goals around so far this season as Antoine Griezmann leads the team with four goals in all competitions. Nine different players have scored for Atletico and the team has allowed just five goals, top in La Liga.

Despite going into the 2018-19 season with a new manager, their fourth in five years, Borussia Dortmund have jumped out to a 6-2-0 record to top the Bundesliga. They have won all five of their home fixtures both of their matches in the Champions League. They began Group A play with a 1-0 victory at Club Brugge followed by a 3-0 win at home against Moncaco.

The addition of Pedro Alcacer at striker ahead of veteran captain Marco Reus and young players Jacob Brunn Larsen and Jadon Sancho in midfield has created an attack that has outscored opponents 27-8 in the Bundesliga.

The two teams have not met since 1996, also in Champions League group play. The away team won both fixtures this season, with Atletico winning 2-1 in Dortmund before Dortmund won 1-0 at the Vicente Calderon.

Diego Costa has trained with the team and is available for the first time since being sidelined with a hamstring injury on October 3. However, Stefan Savic remains on the sideline with a severe muscle injury.

This gives Diego Simeone a full squad to select from and with the weight of the fixture, the manager will start his best 11. Expect Angel Correa as a possible addition on the left wing, moving Saul to center midfield along with Rodrigo with Koke on the right wing. Diego Godin should also move in at center back, with either Filipe Luis or Lucas Hernandez being the odd man out of defense.

Lucien Favre will probably stick with his 4-2-3-1 lineup with Roman Burki at goalkeeper. Guerreiro, Dan-Axel Zagadou, Abdou Diallo and Lukasz Piszczek form the back four with Thomas Delaney and Axel Witsel as the deep-lying midfielders. Larsen, Reus and Sanchez form the attacking midfield with Alcacer as the lone striker.

Diego Simeone paid his respect, saying “Borussia Dortmund are playing very well and their fans help them a lot at home. They’re top of the Bundesliga and that means that our rivals are in the best shape they’ve been in a long time. Tomorrow we will have to play with intelligence.”

Saul Niguez acknowledged Dortmund’s history, saying “Playing in this stadium motivates us.” But he also did not hold back, saying, “They’re in great shape and we know how to hurt them.”

Facing perhaps their toughest fixture of the season so far, Atletico will have to put out their best performance to ensure a result. The team has shown shades of brilliance so far this season, but is yet to play 90 minutes in their best form. A win would go a long way to winning Group A and could set the tone for their next six fixtures before the international break in mid-November. 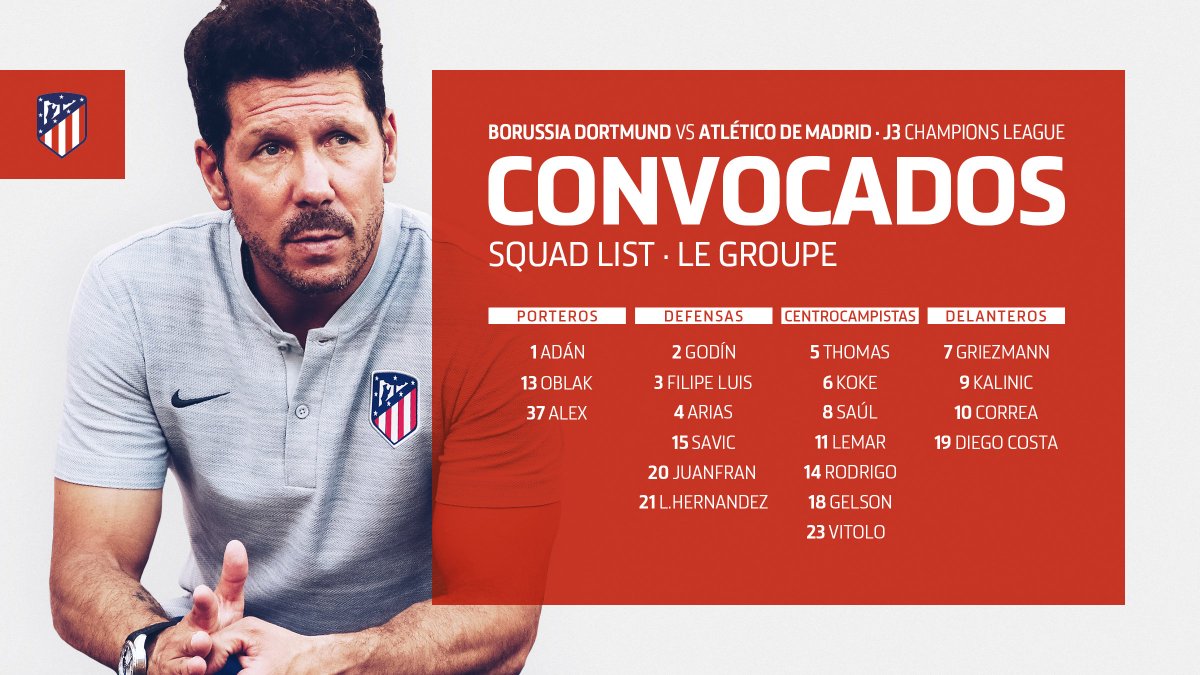