Antoine Griezmann was once again the first goalscorer for Atlético on Sunday, and the colchoneros continued to pour it on in the second half with goals from Vitolo and Ángel Correa in a 3-0 win. The defense kept its 27th clean sheet in all competitions and 18th in La Liga, good for first in that category.

Barcelona also got a win last weekend, so Atlético remains eight points back. The Europa League remains the best chance for a trophy this season and Atlético travels to Russia in the knockout phase on Thursday.

After finishing 8th in the Russian Premier League, Lokomotiv hired a new manager in Yuri Semin and retooled by adding goalkeeper Nikita Medvedev and defender Solomon Kvirkvelia. Their defense has reaped the results, on pace to allow just 20 goals, nine less than last year’s team.

They closed 2017 with six straight wins in all competitions but have struggled a bit since the Russian season came back from its winter break. Lokomotiv defeated Nice in both legs of their Europa League Round of 32 fixture, but faltered in a home draw against rivals Spartak Moscow before losing to Atlético. However, they rebounded with a 2-0 away victory over Ural on Monday.

The team’s 34 RPL goals are spread pretty evenly as Jefferson Farfán leads with eight, followed by Aleksey Miranchuk with 7 and Miguel Fernandes with six.

The red and whites took care of business in the first leg, a 3-0 victory in the Metropolitano. Saúl Ñiguez opened the scoring in the 22nd minute and Diego Costa and Koke followed with second-half goals to give Atleti a huge advantage in the tie.

These teams also met in Moscow in the 2007 UEFA cup. Sergio Agurero opened the scoring for Atleti in the 16th, but Diniyar Bilyaletdinov answered quickly in the 27th for Lokomotiv. Diego Forlán scored the first goal out of halftime, but Peter Odomwingle scored two goals in four minutes to give Lokomotiv a 3-2 lead. Sergio Aguero tied the score late in the 85th to seal the 3-3 shootout draw.

Stefan Savic remains out with a hamstring injury, but Diego Costa (malleolar) and Kévin Gameiro (abductor tear) will also miss the match. Miguel San Román will join the squad as the third goalkeeper and left back Sergi, right winger Juan Moreno and left winger Olabe will also get the privilege of traveling with the team. Axel Werner should get the start in goal as the team’s Europa keeper. Thomas Partey, Ángel Correa, Filipe Luis, and Juanfran all began Sunday’s match on the bench and will hope for starting spots.

Yuri Semin employed a 4-2-3-1 last time out at Ural. Anton Kochenkov started in goal with Maicej Rybus, Saba Kverkvelia, Vedran Corluka, and Mikhail Lysov across the back line. Igor Denisov and Aleksandr Kolomejtsev were the deep-lying midfielders with identical twin brothers Anton Miranchuk, Aleksey Miranchuk and Manuel Fernandes in the attacking roles. Éder was the lone striker.

Simeone will not hold back despite the 3-0 lead saying, “We’re going to play with the same enthusiasm as always.”

3-0 is a large margin but the cold temperature and potent attack of Lokomotiv at home could cause some trouble for Atleti. But if they play like they did in the Metropolitano, they should have no trouble reaching the Europa League last eight. 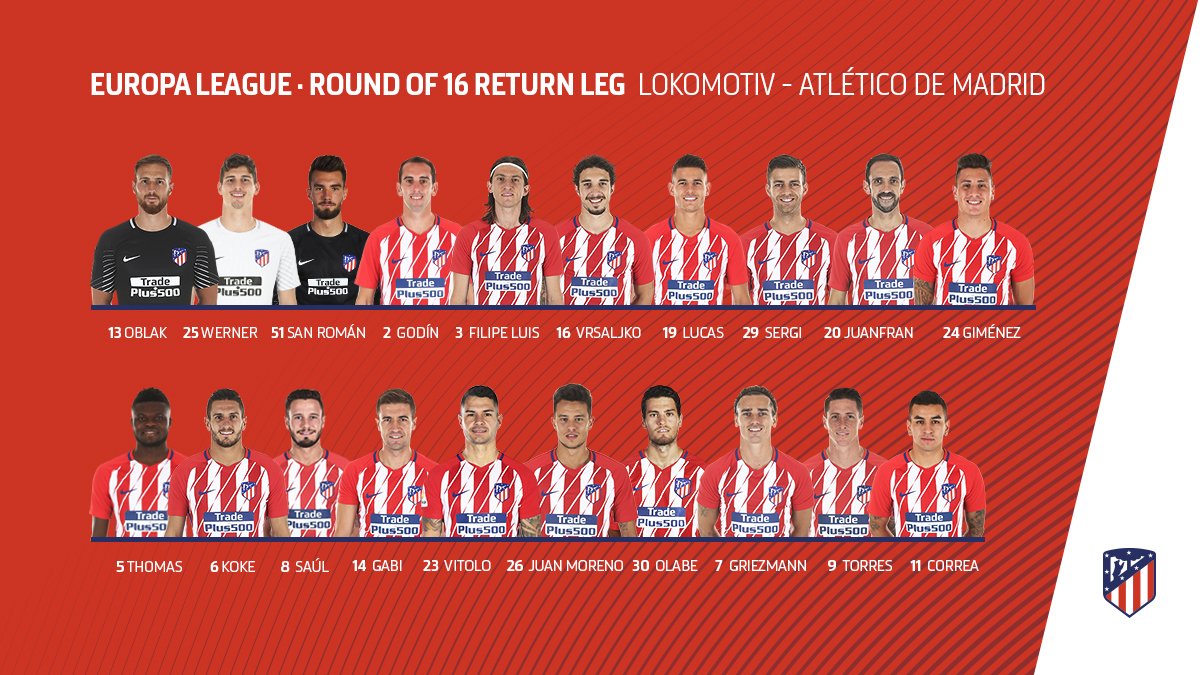